Anther mural I photographed in the town of Golden is this one, titled simply “Billy Wenman Jr. 1887-1984.” 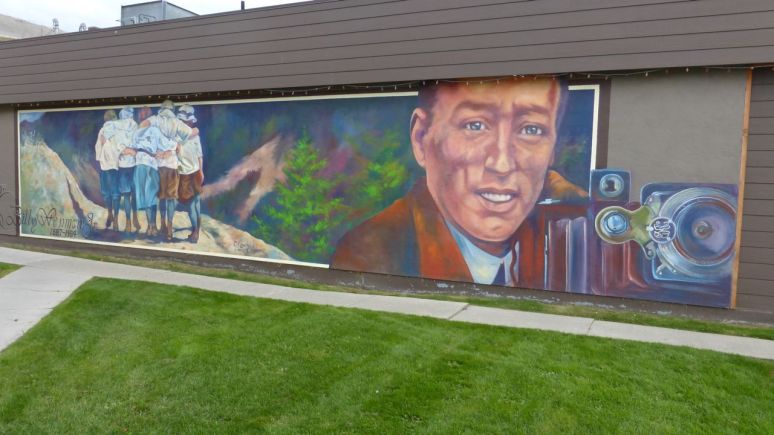 Who is Billy Wenman and what is his claim to fame? It probably has something to do with the camera he’s holding. I’m also curious about the five women  in the background, hanging onto each other looking over a precipice.

Sadly, no amount of googling has made me any the wiser about Billy Wenman. However, on checking the website of the artist, Michelle Loughery, I came across these revealing statements about her work:

“My murals are about people having an effect on their cities, taking  responsibility for their visual and physical environment, leaving records of  their lives and concerns – and in the process transforming neighbourhoods, making inspiring artists out of the youth and our communities”.
~Michelle Loughery 2004

And then there’s this bit of her philosophy of what art, specifically working on murals, can do for a city or town:

“As I began to paint my first murals I realized that the painting of blank walls not only became a beacon to the youth who volunteered their services, but that the murals also attracted seniors and other members of the community, and thus created bridge of cultural healing. This bridging was recreated in each of the communities I worked in and I realized that murals could become the thread that ties a community together; a mural embodies the soul of a community and makes it visible and accessible to all. From this I developed a unique program where a series of murals could be painted in a youth based community collaboration that could become the catalyst to public art development…” (Read her entire Bio)

So whoever Billy Wenman was and whatever he did in his lifetime, it’s obvious his legacy grew in the hands of muralist Michelle Loughery.

Artist Michelle Loughery gives us this background to the mural (copied from comments):

“He was a photographer from the area his photos were so clear for the time that they look like they were taken today…it was the type of camera and glass film plates he used..the ladies are walking on the very newly opened highway..or well road…way back in the day….he took the shot” 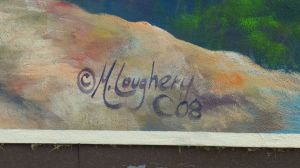